​At the 2009 annual GCV Conservation Forum, speaker Rachel Flynn, then Richmond Director of Planning and Development Review, spoke of the need for 500 trees to fill 500 empty tree wells in the City of Richmond. This information resonated with the four Richmond GCV Clubs who joined together to develop a plan to restore Richmond's urban tree canopy. The project was submitted to the GCV Bessie Bocock Carter Conservation Award committee in 2010 and won! With the awarded funds plus those raised by the four Richmond GCV Clubs, Capital Trees was born. Capital Trees is a private initiative of the 4 Richmond GCV clubs to work in partnership with the City of Richmond to support and increase a healthy urban tree canopy.

The project serves as an example of the best practices for planting trees in an urban setting. Utilizing this model in the future will ensure better storm water management, reduced amounts of pollutants entering the James River and Chesapeake Bay, improved air quality while beautifying the City of Richmond. As one mature tree, planted properly, can reduce storm water run-off by 13,000 gallons a year, it is anticipated that increasing the urban forest canopy and planting trees using our method will significantly reduce run-off, help clean up our rivers and serve to relieve an overburdened and antiquated combined storm water and sewage system. The site chosen for the initial phase of the Capital Tree project, located on 14th Street between Franklin and Main, was challenging. Formerly, it was a concrete canyon bounded by two Commonwealth of Virginia parking garages, four traffic lanes with a concrete median strip, and five small, unhealthy trees. This block drains northwest to southeast with a ten-foot drop toward the river.

​The trees for the project site were carefully considered. Male Princeton Sentry Ginkgos and Swamp White Oaks were selected for their attributes to survive an urban setting (thick skin, low ground level diameter, hardiness). An allee of these trees are planted on the east and west sides of the street as well as the median. There are continuous planting strips on the west side and the median. The east side incorporates a rain garden to capture storm water runoff through plants, an underground cascade system and amended soil. It is estimated that the bio-retention swale in this block will reduce phosphorus at a rate of 25-35%, with a peak reduction of 50%. The trees, rain garden and bio-mix of soil take up other common urban pollutants which previously flowed directly into the storm water system and then into the James River, ending up in the Chesapeake Bay. Phase II of this project expands up 14th Street to Broad Street and is currently underway. For more information, visit http://www.capitaltrees.org 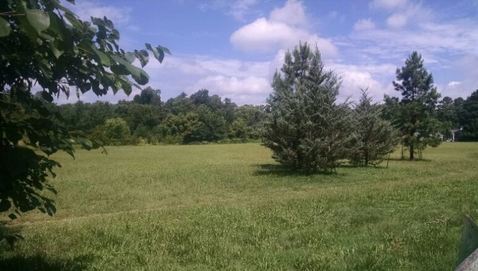 ​For many years Bandy Field has been eyed by developers as prime real estate waiting for the next best building project. As the only remaining open green space (18 acres) on the west side of Richmond, neighbors, UR students, school children, sports enthusiasts, and the close knit community which enjoy Bandy Field have fought to protect it. The Friends of Bandy Field was established in 1998 to which Boxwood has donated funds for many years. Our members have also participated in annual 'clean up' days at the field to remove invasive plant material and replant native wildflowers. In February 2004, Boxwood and The Tuckahoe Garden Club proposed an Environmental Educational Plan for Bandy Field Nature Park for the GCV Common Wealth Award which we won. The award secured funds necessary for the environmental education of the student population and the broader community regarding wetlands and natural habitats. Educational programs and materials were developed, informational signs were installed, a website was developed and the official designation of Bandy Field Nature Park was secured.

​The official dedication was held on May 19, 2007 with Bandy Field being established as an official park in the city of Richmond. To date, Bandy Field Nature Park is still being eyed by developers. Therefore, to ensure its park status in perpetuity, Boxwood and the 3 other Richmond GCV Clubs supported a Conservation Easement (CE) developed by The Friends of Bandy Field.  The CE was secured in 2010. For more information, visit www.bandyfield.org

​In 2007 Boxwood made a gift from our Endowment Fund to GCV's Support, Education, Events and Development Fund (SEED). The purpose of the gift is to underwrite the cost of speakers for the annual GCV Flower Arranging School - for 10 years. Our support was enhanced by a generous gift from Mr. George Stuckey. Our underwriting gift is in memory of long time member Millie Stuckey.

​In 1954 Boxwood, in cooperation with The American Camellia Society, held the first ever Camellia Flower Show to be held in Virginia. The two day show was held in the Old Dominion Room at Miller & Rhodes. Amateur growers from all over the state presented horticulture specimens and more than 75 arrangements were entered in the artistic class. Information on the culture, care and maintenance of camellias was published and given to exhibitors and visiting guests.

The 23rd and Broad Street Project

​In 1963 Boxwood member Mrs. A. K. Muhleman conceived the idea of a beautification project for the empty lot on the corner of 23rd and Broad Streets. The lot adjoined the Mews of Historic Richmond and was in terrible disrepair. For the next three years, Boxwood devoted its time to this project. Christmas House Tours and Auction Sale Fundraisers provided the funding to purchase the lot and hire esteemed Landscape Architect Mrs. Ralph E. Griswold to design a well-planned, attractively planted parking area surrounded by brick walls, trees and shrubs. Funding to purchase the landscape materials was provided by contributions from Church Hill neighbors as memorials and recognitions to loved ones and friends.

​The newly completed parking lot and landscaped grounds were completed in 1966 and gifted to The Historic Richmond Foundation by Mrs. Muhleman on behalf of The Boxwood Garden Club. The parking lot has helped ease parking for visitors to St. John's Church ever since. In 1967 Boxwood was awarded The Garden Club of Virginia Massie Medal Award for our "foresight, conservation of property, fostering public relations, patience and hard work in transforming an eyesore into a corner of beauty and usefulness".

​In 1967 Boxwood members Mary Frances Flowers and Logan Johns discovered an idea that would involve the club for three years. The idea came from an article on the development of a potential James River Park in the City of Richmond by James Walmsley, Editor of The Commonwealth Magazine. A meeting with Mr. Jim Park, then Assistant Richmond City Planner, explained the idea further with sketches and possible ways to develop the park which would encompass the area stretching from the first old lock at the foot of 17th Street to the Huguenot Bridge including parts of the banks on both sides of the river and Belle Isle. The dream of preserving the James River as a park for the enjoyment of area residents and preventing future "ugly" development entranced the Boxwood members who immediately teamed up with Mr. Park. Anticipating that the James River Park idea would meet some resistance, Boxwood undertook the job of marketing the idea to the general public who in turn could lobby for its approval.

​Our fund raising enabled the production of a promotional program that was seen by over 55 organizations and 4,000 people in the greater Richmond area. The program consisted of a 20 minute slide show with a voice over by Alden Aaroe, "the Voice of Richmond" and an informational brochure. It became the feature program of the 1968 Garden Club of Virginia Conservation Forum. The James River Park plan was eventually approved by the City of Richmond and assigned to The Department of Recreation and Parks. Our marketing program was donated to the State Commission on Outdoor Recreation and Parks. Through the years, the designation of the James River as an "official" park has helped to prevent many unsightly proposed projects – two being the installation of high tension electric power lines and a super highway on the banks of the river. In 1970 Boxwood was awarded The Garden Club of Virginia DeLacy Gray Conservation Medal Award for our efforts in helping to preserve our beloved James River.

"On January 6, 1977, Governor Godwin, then in his second term, presided over the dedication of the Science Museum's first exhibit gallery, The Discovery Room. The event celebrated the fifty-eighth anniversary and rebirth of Broad Street Station and the culmination of over seventy years of effort to establish the Science Museum of Virginia."
(http://en.wikipedia.org/wiki/Science_Museum_of_Virginia)

In 1980 all four Richmond GCV Clubs sponsored British flower arranging authority Shelia MacQueen at an all-day flower arranging program held at The Science Museum. Various other fundraisers were held by the 4 clubs individually to provide monies for the project and to excite the public about the new Science Museum. The East Terrace was part of the master landscaping plan and was completed in 1981.

Tablescapes II – The Art of Creative Entertaining was brought back by popular demand after the successful Tablescapes I. This time it was a three day event with multiple activities. Thirty five settings were arranged in the Carillon by Boxwood members and seven local Interior Designers. The official china of the Virginia Executive Mansion was on display as well as various Presidential china patterns from the White House. Concerts on the Carillon accompanied the ribbon cutting by then current Virginia Governor Gerald L. Baliles followed by a luncheon at which Montaldo's provided models wearing the latest fashions. Three house museums in the area were also open for the enjoyment of the Tablescapes II guests who came from up and down the east coast.
​
After many months of consultation with Landscape Architect Kenneth Higgins followed by demolition and re-construction, the new landscaping was completed with low growing hollies, azaleas and ground covers that enabled wheelchair bound residents to look over them to the vistas of Byrd Park. The dedication ceremony was held on November 24, 1988 to much fan-fare and excitement.

​In October of 2009, Boxwood sponsored a fundraiser with Margot Shaw, Editor of Flower Magazine, at Lewis Ginter Botanical Gardens. Margot presented her story of "Birthing the nation's only floral lifestyle magazine" and gave a floral arranging demonstration highlighting the use of 'every day' containers and simple arrangements.

Floral designer from Birmingham, Alabama
​
​Boxwood hosted fund raiser, "Flowers with a Southern Flair – a morning of flower arranging with Sybil Brook Sylvester" on March 22, 2011 at UR Jepson Alumni Center. Sybil demonstrated simple flower arrangements, technique, ideas and tips of the trade with her arrangements being auctioned off to the lucky winners.

The first weekend after Thanksgiving each year has been reserved for the Boxwood Greens Sale.  Select artists and crafts people sell their one-of-a-kind items while wreaths, arrangements, kissing balls, advent wreaths and tabletop trees made by Boxwood members are sold to raise funds for club projects and donations.