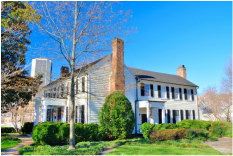 There are five major awards given by the Garden Club of Virginia to its members/club for outstanding achievements. Boxwood and its members have received the following recognitions:


GCV Massie Medal for Distinguished Achievement
The oldest and most prestigious award given by the GCV was inaugurated in 1928. It recognizes the recipient(s) who has/have served the GCV with unusual dedication and distinction. The recipient(s) must be effective in promoting the betterment of the Club and demonstrate excellence in horticulture, restoration, preservation or conservation of natural resources of our Commonwealth.

1953:  The Adam Craig House (1812 East Grace Street), the second oldest house in Richmond dating to 1790, was saved from demolition by the Association for the Preservation of Virginia Antiquities (APVA) in 1935. This childhood home of Jane Craig Stanard, the subject of Edgar Allan Poe's "To Helen," was purchased by APVA and restored as one of the few remaining 18th century structures in Richmond. Beginning in 1947, Boxwood members assumed full responsibility for the Craig House garden by planning, restoring, maintaining and preparing it for nine years. The Massie Medal was awarded to Boxwood in 1953 for its restoration and maintenance of this important garden.

​1967:  For 20 years, Boxwood continued to focus its numerous garden restoration projects throughout the Church Hill area of historic Richmond. In 1963, the club developed, funded and implemented another important civic beautification project at the corner of 23rd and Broad Street adjoining the Mews of historic Richmond. The three year project, initiated by Mrs. A. Kenton Muhleman, concluded in 1966 when Boxwood completed the new parking lot and landscaped grounds to ease parking for visitors to St. John's Church and complement the adjoining St. John's Mews. Boxwood gave this gift to the Historic Richmond Foundation. For "transforming an eyesore into a corner of beauty and real usefulness", Boxwood received its second GCV Massie Medal in 1967, the first time a GCV garden club had won the medal two times!

1974:  During her tenure as GCV President, Boxwood member Mary Frances Flowers saved the Kent-Valentine House by purchasing it as the GCV Headquarters and secured its tax-exempt status. This pioneering preservation effort on Franklin Street coupled with Mary Frances's leadership in the community and her work in various capacities for the GCV earned her the Massie Medal. The Medal's inscription read, "To Mary Frances Flowers who, crowning a lifetime of service, became the guiding spirit of the Kent-Valentine House."

2003:    Boxwood's relationship with the KV House continued with the extraordinary service given it by member Barbara Catlett. For 13 years (1990-2003), Barbara supervised the KV House renovation and its 2,500+ square foot addition which we enjoy today. In recognition of this steadfast dedication, Barbara received the Massie Medal in 2003.

The deLacy Gray Conservation Medal
This GCV award was established in 1965 to recognize the outstanding effort of a member or club who/which furthers the knowledge of our natural resources and encourages their wise use.

1970:  Boxwood began a new education and conservation project in 1967 to acquaint Richmonders with the benefits of developing what we now know as the James River Park System. Members Mary Frances Flowers and Logan Johns approached the Assistant Richmond City Planner, Jim Park, about a proposed James River Park they had read about in Commonwealth Magazine. Mr. Park produced sketches of possible ways to develop such a park extending from the first old lock at the foot of 17th Street to the Huguenot Bridge, including parts of the banks on both sides of the river and even Belle Isle. With guides, Mary Frances and Logan explored the area, climbing up and down the banks of our founding river. For such a park to become a reality, it would be necessary to educate Richmonders on the benefits of developing the James River Park System. From hundreds of slides they had taken, Mary Frances and Logan developed a promotional slide program. Together with the Richmond Jaycees, Boxwood showed its education program to over 55 organizations and 4,000 people. This program was the feature of the GCV Conservation Forum in 1968. The plan for the James River Park was adopted by the city and is now run by the City Department of Recreation and Parks. Boxwood was the recipient of the deLacy Gray Conservation Medal in 1970 for this education program chaired by Mary Frances and Logan.

2003:  Member Mary Glen Taylor, also a member of the Richmond Tree Commission at the time, was the moving force behind a project to replant appropriate trees on a section of Monument Avenue from Roseneath to Staples Mill Road, a 13 block area. With the help of landscape architect Anna Galusa Aquino, Mary Glen selected the "right trees" for the area. She also coordinated with the City agencies in order to undertake this important project. This grand avenue is much more so thanks to Mary Glen's efforts. Mary Glen is also deeply committed to Bandy Field Nature Park, an 18-acre, West End neighborhood open green space. She helped form "Friends of Bandy Field" (FoB) in 1998 to save the field from development thereby preserving the area as a quiet "community commons" for passive recreation for the enjoyment of adults and children. Through the work of FoBF, Bandy Field was ordained as city park in 1999 to be preserved in its natural, undisturbed condition by the City's Department of Parks and Recreation. Mary Glen's commitment to and vigilance regarding this area continues to be essential to the preservation of Bandy Field.

Common Wealth Award
This annual grant was established in 1979 to promote projects which focus on conservation, beautification, horticulture, preservation and/or education. Member Anne Miller, past Chair of the GCV Conservation Committee, started the Common Wealth Award to emphasize the common "wealth" we each share in Virginia.

1999:  Boxwood shared the Common Wealth award ($3,000 for second place) presented to the 4 Richmond GCV garden clubs for our work in establishing the downtown Richmond Library Park.

2005:  Boxwood and Tuckahoe Garden Clubs received the Common Wealth Award for help in funding the Environmental Education Plan for Bandy Field Nature Park. These funds supported the environmental education program for students and the broader community regarding wetlands, natural habitats and numerous other park features. Educational materials, Bandy Field Nature Park signage and a website were supported by the grant.

Bessie Bocock Carter Conservation Award
Established in 2009, this fund supports the implementation of community projects that serve as catalysts for community action. This monetary award supports projects which result in natural resource conservation or environmental protection within the Commonwealth.

2010:  The four Richmond GCV clubs (The Boxwood Garden Club, The James River Garden Club, The Three Chopt Garden Club, The Tuckahoe Garden Club), won the Bessie Bocock Carter Conservation Award for Capital Trees, a public-private partnership to support and increase a healthy, urban tree canopy in Richmond. The funds from the Bessie Bocock Carter Conservation Award coupled with those raised by the clubs and donated by the City enabled the completion of Phase I of the project on 14th Street between Franklin and Main. By employing best practices for planting trees in an urban setting (careful tree selection, continuous planting beds, rain gardens, amended bio-mix) and increasing the urban forest canopy, it is anticipated that storm water run-off will be significantly reduced, our rivers and the Bay will be cleaner , and our overburdened and antiquated combined storm water and sewage system will be relieved.

Horticulture Award of Merit
This award was established in 1960 to recognize individual members of GCV who have achieved significant accomplishments in horticulture both personally and in the community at large. Boxwood award recipients include: